Today my blog is being hosted by Sydney Tarr, the heroine from my next publishing venture. Sydney isn’t a journalist but she is known for having a fine eye for details as well as an inquisitive nature. She’s also really good at ferreting out secrets. So when Sydney expressed an interest in meeting the writers from Because My Heart Said So… A Friends-To-Lovers Collection by Nia Forrester, Jacinta Howard, Rae Lamar, and me being released in June — I jumped on that like a drop of water on a hot skillet.

Sydney:  Ms. Forrester, it’s very nice to meet you. Lily is always going on and on about you and your books, she says your last one The Fall was “da bomb”. Anyway I wanted to know since you’ve been writing a while and you’ve published many successful and well-loved books; what drew you into doing a collaboration with other authors at this stage of the game?

Nia: Hey Sydney! Honestly, it was writer’s block. Or something like it. I never actually stop writing, but I went through a period of not writing well. Not writing anything that I was satisfied with, and being incredibly self-critical. And someone approached me to be part of an anthology where I would write a story that would be no more than 3,000 words. Easy enough. So I accepted, wrote the story I wanted to write and rediscovered my voice. I think the additional responsibility of writing for something that represented me but also didn’t let down other authors whose names would be on the book as well got me out of my head, and focused me on what I wanted to put on the page. Now this particular collaboration, with Lily Java, Jacinta Howard and Rae Lamar was easy to agree to. They’re all writers whose talent and capacity to evoke emotion I respect. So hell yeah I was drawn to this collaboration! It was a no-brainer. And there’s something about playing the game with players you respect, right? It makes you put your best foot forward. I hope I did that in this collection.

Sydney: For you what’s the best part of doing a collaboration like this?

Nia: I’ll speak to this particular collaboration because I haven’t done too many. The camaraderie is what makes this collaboration special. Writing is, for me at least, very solitary. I don’t like to talk about my characters, I don’t have people read drafts. I don’t generally like to spend very much time with people in general while I’m writing. So it was a revelation and a delight to me to find that I enjoyed being in the trenches WITH other writers and working toward a common cause. I enjoy discovering other writers, promoting them, turning folks on to their work … but I don’t generally ‘socialize’ with writers in my writing space. That I keep quiet and private. This time, I enjoyed opening up a little. And it helped that my collaborators are three pretty cool chicks. No drama. No competitive bullshit. Just positivity and support, and a sense of mutual agonizing – we all want to get it right.

Sydney: Tell us about your story in the collection. I believe you call it Acceptable Losses. Hmmm, who had to do the accepting, eh? 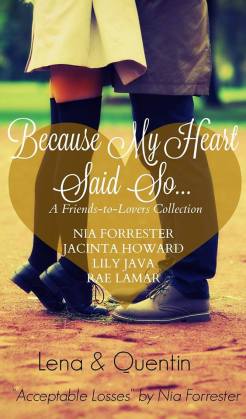 Nia: No spoilers! The main characters are Quentin and Lena, who work together at a law firm and have a bond built at work but which transcends the job. Lena is already aware that she feels more for Quentin than friendship, but as is often the case, the guy (Quentin) is out of touch with his own feelings. So to deflect them, he fixes her up with his brother. And of course, that becomes a catalyst for Quentin to begin to face up to emotions he hadn’t acknowledged up till that point. I think both characters have to do some accepting of loss in this story. Quentin is getting out of a marriage and has to come to terms with the fact that he may have made choices that led to its disintegration; choices that seemed to indicate that it was acceptable to lose his wife. And Lena is his work buddy, who is accepting far less from Quentin than she wants. And the question is whether friendship when you want more than that, is an acceptable loss.

Sydney: Everyone I’ve talked to about this story seems to think you’re planning to bring the “drama” with this one. Is that true and what can the reader expect?

Nia:  Nah. I hate to disappoint but Nia don’t do ‘drama’. My stories are more about characters having quiet and gradual realizations of the pain and folly they may have inflicted on themselves and others. And about the discomfort of realizing you aren’t who you thought you were; or that someone you love isn’t who they represented themselves to be. But drama? Nope. Never. I need to make that a tagline: Nia Don’t Do Drama. Not in any of my other books, and certainly not in ‘Acceptable Losses’. But I hope folks check it out –and the great work by Lily Java, Rae Lamar, and Jacinta Howard—anyway!

Sydney: Thanks for stopping by.  You can find out more about Nia Forrester and her books below.  Next Thursday,  I’m having a chat with Jacinta Howard.

I live in Washington D.C. where by day I work on public policy and by night I read authors who move me, and craft woman-centered fiction. I like all genres and think nothing is too trivial to read, or to write about. Relationships are my greatest obsession; how they work, why they don’t and what happens as they spin out of control, or come together perfectly. When I don’t write, I think about writing, and unpack my own experiences for things to write about. And in the odd moment, when I’m doing neither, I enjoy time with friends, observing popular culture and decoding what it all means.

Join Nia, Jacinta, Lily, and Rae in the Because My Heart Said So… Facebook group about the book here and get exclusive content, excerpts, giveaways, and secret writer’s tales about the collaboration and how each story came to be, #4Writers4Love.