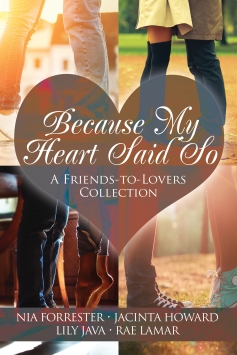 Truly I haven’t been this excited since I published my first book, Sticky Moon, eighteen months ago. The collaboration that I’ve been working on with some of my favorite writers for the last two months has finally been accomplished and is now available for PRE-ORDER on Amazon and set to release on June 15th.

Because My Heart Said So: A Friends-To-Lovers Collection by Nia Forrester, Jacinta Howard, Rae Lamar and yours truly is nearly 500 pages of brand new work, separated into four novellas of dare I say, awesome women’s fiction.  Four Authors. Four Stories. For Love.

This about my story called Blackbirds:

Once upon a time Sydney Tarr and Elliott Vance were friends: fast friends, ride or die, pledge of allegiance, take it to the mat “friends”. And the fact that Sydney loved her friend more than she should didn’t matter until one unusual and spectacular night, it did. It mattered very much. Still not every story is a fairy tale, is it? Friends do part — sometimes forever — but, not always.

An excerpt from Blackbirds:

BOSS Lounge was the single set’s hunting ground of nightclubs in Santa Barbara. A tight space, it seemed to be filled to all possible proportions by the time Elliott got there at about twenty minutes after midnight. The outdoor patio was the place for dancing, and the DJ was clearly settling in for a long string of seriously accessible dance hits. The crowd was feeling him and seemed to be in a bit of frenzy as they swayed, jumped, and pumped their hands in the air.

It wasn’t long before Elliott spotted Brian and Sydney. They were at the bar. Brian sitting on a stool with his arm casually strung around Sydney’s waist. They both were laughing and holding tall fruity looking drinks with straws appropriate to the beachside ambiance. Sydney had changed after dinner. She was wearing low-waist black pants with a simple grey midriff. She had on a lightweight black leather jacket but it was open and did nothing to hide the smoothness of her skin around her flat stomach and picture perfect navel. Elliott stood frozen, watching them from about twenty feet away. People were bumping into him, but he didn’t notice or care particularly. He was more interested in figuring out how he’d get Sydney out of there without causing a scene.

Then Brian whispered something in her ear. She nodded vigorously, and they were moving into the crowd and dancing. Elliott thought he’d had enough just seeing Brian’s hand so casually placed on Sydney’s waist, but he’d never seen her dance. He found he was both fascinated and incensed at the sight of her. It was like he was looking at someone else — some part of her he hadn’t met yet, like some pod creature had taken over Sydney and suddenly she was moving with a sensuality she’d never even hinted at before. Brian danced to her back, his long muscled arms out on either side of her, and Sydney was swaying in front of him. Her waist and hips seem to separate from each other and move independently from other still very noticeable parts of her body.

Fuck it. Maybe a scene was called for.

It was during that thought that Brian finally spotted him. Spotted him or felt his presence might be a more accurate description. Slowing his pace, Brian stood there for a moment watching Elliott watch them. Finally, he nodded and bent low to whisper in Sydney’s ear again. When he’d finished, her head whipped around, and when she spotted him standing across the patio, her smile was so huge Elliott almost forgot how pissed off he was.

Fighting the packed house, Sydney made her way towards him with a measured and unhappy Brian close behind.

“Elliott!!” Sydney grabbed both his arms and shook him jumping up and down slightly. “I’m so glad you’re here.”

He suspected she was pretty sloshed, but she did a good job of hiding it with youthful exuberance. Something she’d no doubt learned from watching Cyrus drink himself silly over the years.

“You have to dance with us. You must! But first,” Sydney pointed one finger in the air, “first I must go to the bathroom before I embarrass myself.”

Brandishing the finger back and forth at both of them, Sydney made one final command, “Don’t either of you move from this spot. I’ll be right back.”

They both watched her go.

“Hey Elliott, glad you made it out man.”

Elliott had never known what it felt like to have ice running through his veins until that moment.

“I thought we were all hitting the sack early, Brian.”

Brian shrugged, “Hey man, the plan changed. We did try to call you.”

“Yeah,” was all Elliott could manage.

“Can I ask you something, Ell?”

“Are you ever planning to tell her?”

“You’re irritating the fuck out of me right now.”

“Yeah, I can see that too. The question is how exactly am I doing that?  Are you really trying to tell me you came all the way down here with your balls twisted because you’re on the ‘we should all be asleep by now patrol’? Man, if that’s the case then you are more fucked up than I ever imagined.”

Elliott took a step closer to him, “What did you just say to me?”

Brian raised both hands and backed away.

“I like my job way too much to fight you for her, Ell.”

“Maybe you ought to leave then.”

“I will,” Brian said, starting to turn away but not without a parting shot, “but Ell, you should stop playing at being Mr. Unattainable with her. I’d bet half my paycheck Sydney is into you too, but she thinks you’re friends,” Brian said the word ‘friends’ using air quotes and a half smile.  “I guaran-dam-tee you she doesn’t think she could possibly have someone like you. Can you believe that shit?  As special as that girl is, she has no fucking clue you’re ready to stab me in the heart for her right now on the damn dance floor.”

“Go if you’re going, Brian. Be in the hotel lobby at seven a.m.”

And with that goodbye and a little salute, Brian took his leave.

Because My Heart Said So is available now for PRE-ORDER.