Creative ideas or story lines are not easy to come by, particularly simple ones.  When I see or hear about an idea like that my ears perk up as if I’m a puppy who’s just heard someone tearing into her favorite bag of treats  or perhaps the key opening the lock on the front door when the Can Opener is expected home.  I’m addicted to that first feeling of joyful excitement and I’m always on the lookout for it. I also have great faith that if I sense that feeling, I won’t be let down.

When I first heard about A Quiet Place my ears leaped to attention. Then I heard it was starring John Krasinski and Emily Blunt, married actors, celebrities and parents, playing a married couple with children.  Then I heard it was a horror movie, which for the most part, takes place in complete silence.  Then I heard it was Krasinski’s second film in the director’s chair. That’s when I checked out the trailer.  After seeing it I decided I would definitely go see the movie but if I did, I wanted Ms. Z to go with me. 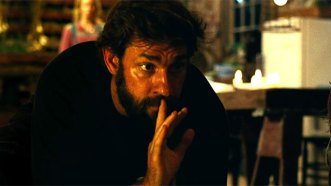 Ms. Z has always loved The Office, a show that featured Krasinski in his breakout role. I’ve watched a few episodes and have nothing against it.  I could never watch it with a lot of enthusiasm though, because I was always aware that while out-and-out farce, it was still not unlike actual offices I’d worked in.  Ms. Z also loves John Krasinski, which I completely understand.  Other than his love of the Patriots, (he’s originally from a New England state), I literally can’t find anything unlikable or wrong with him.

Ms. Z and I don’t particularly seek out horror movies.  I like them a lot more than she does (it took me almost ten days to convince her to see Get Out, which she’s now seen many more times than I have cause it’s funny).  For the most part, I can hold my head up and eyes open during scary movies most of the time, but as I suspected from the preliminary information I had, I found A Quiet Place riveting from beginning to end.  I didn’t feel a false note anywhere in it.  The story is about a family of five who, in order to survive in the world they must remain absolutely silent or they will be eviscerated by monstrous creatures who hunt and lay in wait for just one sound to pounce. See? Simple.

Here’s my list of reasons for why you should go see it.

There were several shock value scenes that were nerve-wracking in this flick but none felt particularly gratuitous. Forewarned though is forearmed.  Ms. Z who probably hangs out with me too much noted that there was not a single black face in the film but she said that was alright because “if it had been about a black family they would’ve had to call it the new Underground Railroad for sure.”