Today I’m thrilled to have an opportunity to celebrate author J.L. Campbell. Her new release, The Thick of Things is yet another wonderful book offering published by Garden Avenue Press.

Learn more about the book and its author below… 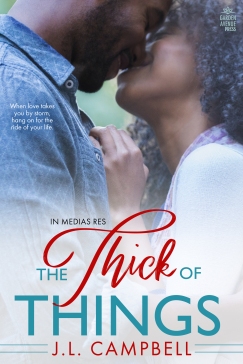 The Thick of Things by JL Campbell

BLURB: Life has a way of going awry when you least expect it, and Khalila Skyers learns this lesson the hard way. In one devastating blow after another, she loses her cosy existence. Then Douglas Blythe overtakes her life like a flood, and she’s not equipped to deal with an attraction that seems forbidden and overwhelming. But her body and heart want what they want, and leave her wondering if she ever knew herself at all.

Douglas is determined to help Khalila move beyond her obsession with the past and reach for love a second time. No matter how long it takes. No matter the distance. He’s going to prove he’s worth the risk.

From The Thick of Things

His laughter hit my ear before I saw him. The sound was full and rich, like a mouthful of dark chocolate.

From where I stood, inside the ballroom door at the welcome reception, I craned my neck out of curiosity.

Douglas Blythe entered the room, chuckling over something the man he was walking with had said to him.

I couldn’t help wishing his smile was directed at me. While I stood spellbound, Nica, another volunteer, showed the stragglers where they should sit since the function had already started.

The red jacket Douglas wore told me he was part of the Antigua Barbuda group and too late, my hand went out in a jerky motion. The man behind him took the program I was handing out, smiling politely when I muttered a greeting.

Usually, I didn’t behave as if my brain was in go-slow mode, but something about Douglas Blythe threw me off-balance. I put him out of mind while I wondered if I knew what I was letting myself in for by volunteering for this event.

I’d become a regular volunteer at these golf tournaments where my husband, Trent, competed because it was easier to pass the time working than to vegetate in the hotel room or by the poolside. Volunteers only worked half the day and the afternoon was free, if we weren’t involved in scoring.

This time, I would spend the entire day working because Trent and I were halfway down a long and slippery slope. We had only been here for one day and I knew it was a mistake to come to Montego Bay. Trent insisted on arriving a day early so he could fit in an extra practice round. After the game, he spent the afternoon eating and drinking with his playing partners, which meant I was alone much of yesterday.

We’d both thought being together in a different setting would help our failing marriage, but so far, I had no evidence that it would. Being confined in the same space for extended periods only reminded us of what we’d already lost, and neither of us had the capacity to deal with our emotional problems. Nor did we seem to have the desire or will to talk about them. Trent’s decision to socialize with his golfing buddies, instead of spending time with me, was a case in point. How were we ever going to work out our problems if we refused to sit together and talk about our relationship?

That could have been why Douglas made such an impression. My preoccupation with him started when we met in the elevator of this same hotel last year. I was running late and stood waiting on the eighth floor, jabbing the button.

A muted ping let me know the massive chrome stall was a floor away. When the doors opened, Douglas stood inside wearing knee-length shorts, loafers, and a creamy golf shirt that set off his deep-mocha complexion. I recognized him from the registration activity the previous evening.

“Good morning,” I said, stepping inside while juggling my handbag and laptop, plus a file jacket.

He nodded and let his eyes sweep my sandals, black pants and white shirt before he smiled. “Good morning to you, too.”

After that I ignored him, staring straight ahead.

His appreciative gaze unnerved me. Here was a man who was conscious of what he was doing and wasn’t afraid to let me know.

J.L. Campbell wrote her first novel at the age of twelve. After a hiatus of more than two decades, Campbell started writing again in 2004.  Since then Campbell, who often features the vibrancy of Jamaican culture in her stories, has written twenty-seven booksand two short story collections. She writes contemporary romance, romantic suspense, women’s fiction, as well as new and young adult novels.  Follow JL Campbell online at these sites:

One thought on “The Thick of Things by J.L. Campbell”